With our diabetes-management-software-SiDiary you can easily import data with Accu-Chek Smart Pix Communicationbox from your Accu-Chek Aviva II blood glucose meter and use lots of advantages of statistical analysis, trend analysis and graphics to improve your therapy together with your doctor. 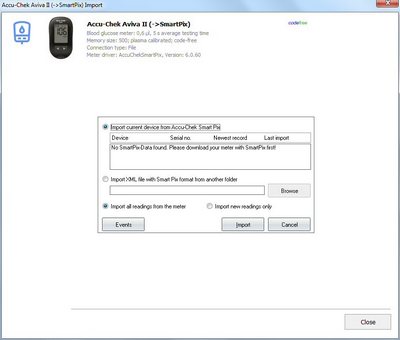 For the data import from Accu-Chek, an Accu-Chek Smart Pix communication box is necessary, which you can order as an original manufacturer attachment directly from an online-shop. For this youll need an USB-Port on your computer. Please consider the manufacturer's information about minimum system requirements!

At the Accu-Chek Website you can get more information directly from the manufacturer by choosing your country/region.